For months MMA fans had been anticipating the UFC 223 matchup between unbeaten lightweight Khabib Nurmagomedov and Tony Ferguson, but April Fools’ Day saw the pairing scuttled for the fourth time in as many attempts with Ferguson falling victim to a freak injury.

Featherweight champion Max Holloway stepped in for Ferguson on six days notice, but wasn’t able to make weight for tommorrow night’s fight at Brooklyn’s Barclay Center. The UFC scrabbled to find an opponent for Nurmagomedov in the form of Al Iaquinta, while Rose Namajunas will face Joanna Jedrzejczyk for the second time in a row to defend the women’s strawweight belt.

Last November, at UFC 217, Namajunas shocked the world with her knockout victory over the previously undefeated Jedrzejczyk. The latter, who had been considered unbeatable, demanded an immediate rematch and her wish was granted.

Jedrzejczyk is eager to show the world Rose’s win was a fluke, while the unflappable champ feels more than ready to prove otherwise. 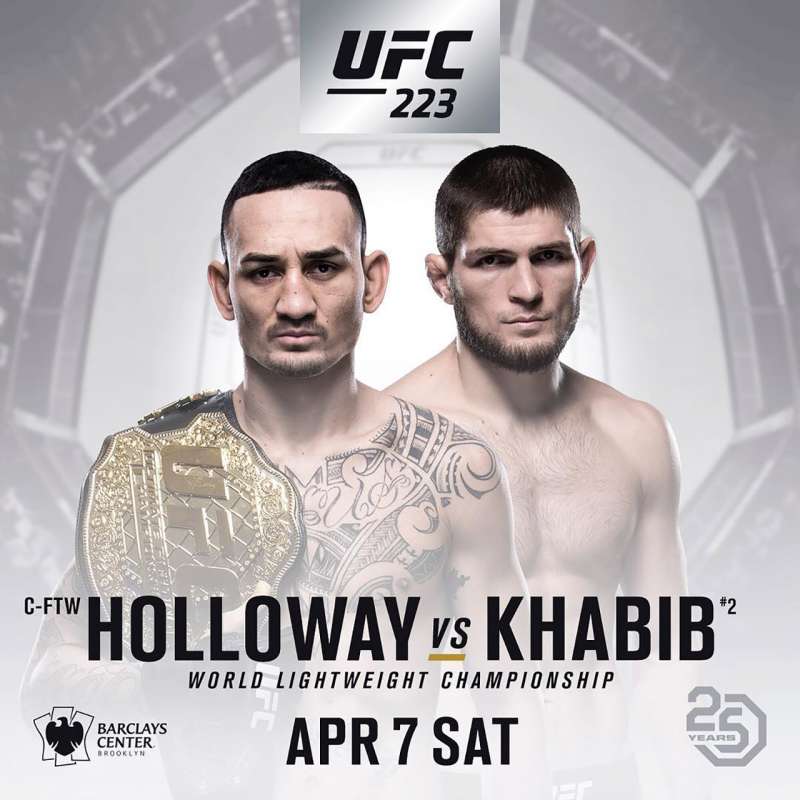 Saturday night, Nurmagomedov was to put his perfect 25-0 MMA record on the line versus Holloway who had won his last dozen fights after dropping a decision to Conor McGregor in August of 2013.

The fight would have represented a classic clash of styles, as Nurmagomedov is known for his ground-and-pound wrestling, while Holloway is a classic stand-up striker.

Episode 1 of UFC 223 Embedded, former strawweight champion Jedrzejczyk pushes herself with the goal of reclaiming her belt, and defending champion Rose Namajunas readies for the rematch. Meanwhile, title-contender Nurmagomedov arrives in New York City for his long-awaited championship fight against Ferguson.

Jedrzejczyk enjoys a going-away breakfast with her camp, and Nurmagomedov brings his team to Renzo Gracie’s Brooklyn facility. Fight week kicks off with a shocking announcement from UFC President Dana White, and Nurmagomedov reacts to the news that his opponent will now be Holloway.

On Episode 2, former strawweight champion Jedrzejczyk learns of the change to the main event on her way to New York and weighs whether it’s all an elaborate April Fools’ joke. In snowy Brooklyn, Nurmagomedov continues training and doing media, grateful to have an opponent.

Still training at home in Colorado, Namajunas shows off her compost garden and dodges tennis balls. Holloway flies to New York from Hawaii and promptly hits the gym, where he’s quickly surrounded by members of his opponent’s camp — and Khabib himself.

On Episode 3, a well-rested Jedrzejczyk trains to challenge for the strawweight belt she long held, and Nurmagomedov travels with his team en masse to a nearby gym. His fellow headliner, Holloway, vows to stick to his game plan regardless of opponent.

In other action, UFC lightweight Michael Chiesa enjoys being on his family’s home turf, while Namajunas arrives in Brooklyn, as does Chiesa’s opponent, former champion Anthony Pettis.

On Episode 4 of UFC 223 Embedded, Nurmagomedov and his opponent Holloway stay on track with their training during fight week. Jedrzejczyk starts her day with breakfast and Spongebob, while Namajunas brings her dog to a photo shoot.

Chiesa keeps his competitive juices flowing playing video games in his room. Then the stars of the event’s two championship bouts attend the official press conference and open workouts, where Nurmagomedov and Holloway entertain with spirited trash talk.

Lightweight champion Conor McGregor unexpectedly arrives in Brooklyn, causing a disruption on the loading dock. Dana White checks in with athletes affected by the incident and addresses the situation.

The UFC celebrates its 25th anniversary by visiting the New York Stock Exchange, and a surprised Ragin’ Al steps in to take on Nurmagomedov in the main event.