At 36, Roger Federer is considered to be an old man by tennis standards, but that hasn’t kept him from staying at the top of his game — as evidenced by last year’s five-set victory over Rafael Nadal in the Australian Open final and record eighth Wimbledon title.

At this year’s Australian Open, Will Ferrell feted Federer after his straight-sets, opening-round victory over Slovenia’s Aljaz Bedene.

Channeling his character Ron Burgandy from the comedy Anchor Man, Ferrell compared the timeless one’s game to that of a “silky gazelle” and later posited Federer’s eternal youth was a result of eating wombat meat.

While many are familiar with Federer’s record 19 Grand Slam singles titles, most are unaware of the Swiss legend’s even loftier achievement — playing tennis at the highest-ever elevation. For a Lindt Chocolate promotion in 2014, Federer invited American skier Lindsey Vonn to volley on a temporary court installed 11,401 feet (3,475 m) above sea level in the Swiss Alps.

Roger Federer playing against Lindsey Vonn in the Alps, what an amazing location. #Switzerland #sportsbiz pic.twitter.com/aBUTHC1wTy

.@RogerFederer will do anything for a @Lindt chocolate. He joins @LinseyVonn at 3,454 metres! http://t.co/pKmd84Pu2j pic.twitter.com/WZE2X5H8EX

The match was played on the Aletsch Glacier, which at 14 miles (23 km) in length is the Alps largest. The venue made for some spectacular and slightly surreal pictures.

This isn’t the first time Federer has played on an elevated court. In 2005, he joined with Andre Agassi in a promotion for the Burj Al Arab hotel in Dubai. The hotel’s helipad was made over as a tennis court in the sky that looked like a scene from a science-fiction movie come to life.

The W Barcelona hotel tried to replicate the buzz created by the Dubai stunt, with a terrace-top mini tennis court of their own. ATP pros Robin Soderling and Fernando Verdasco exhibited their skills 21 stories above the Mediterranean.

As way of a summary, we have provided a chart on the world’s highest tennis courts to date. Keep in mind that while the Alps court was more than 10 times the elevation above sea level as the Burj al Arab court, the exposure (or falloff from court’s edge to the ground) was nil. 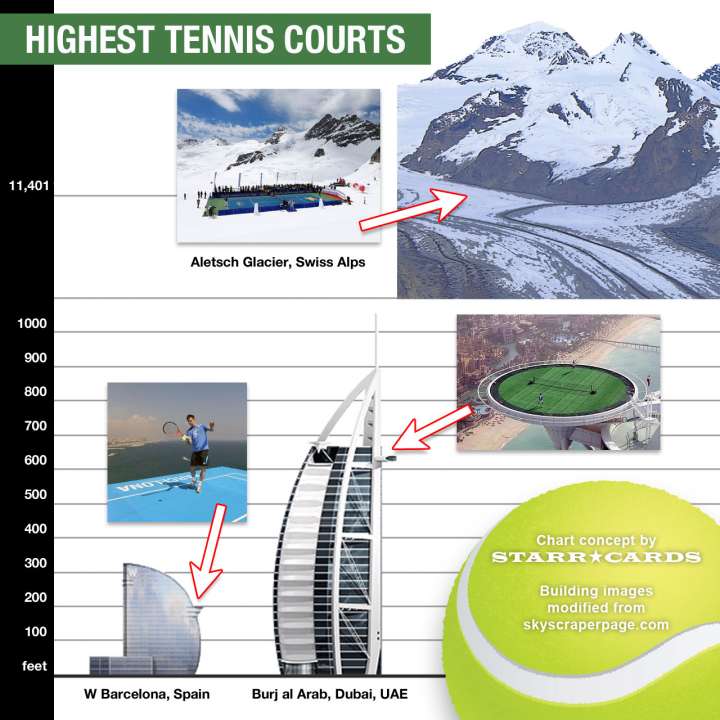 If you have ever wondered about stray tennis balls from elevated courts posing a threat to unwary pedestrians on the street… wonder no more.