Before the current crop of top-ranked men’s tennis players came to prominence, the most frequently cited candidates for greatest of all time were Rod Laver, Roy Emerson, Bjorn Borg, John McEnroe and Jimmy Connors. When Pete Sampras broke Emerson’s career record for Grand Slams, his name entered the discussion, as did Roger Federer‘s when The Swiss Maestro later surpassed Sampras’ total.

Federer claiming his record eighth Wimbledon crown this past summer, and sixth Australian Open title to kick off 2018, has led to a growing consensus that he is the best ever play the game. Still, there are two other current players poised to challenge Federer’s claim to G.O.A.T. in upcoming years.

With Rafael Nadal winning his eleventh French Open this past weekend, he moved into sole possession of second place with a total of 17 Slams, while Novak Djokovic is tied with Emerson’s total of 12. 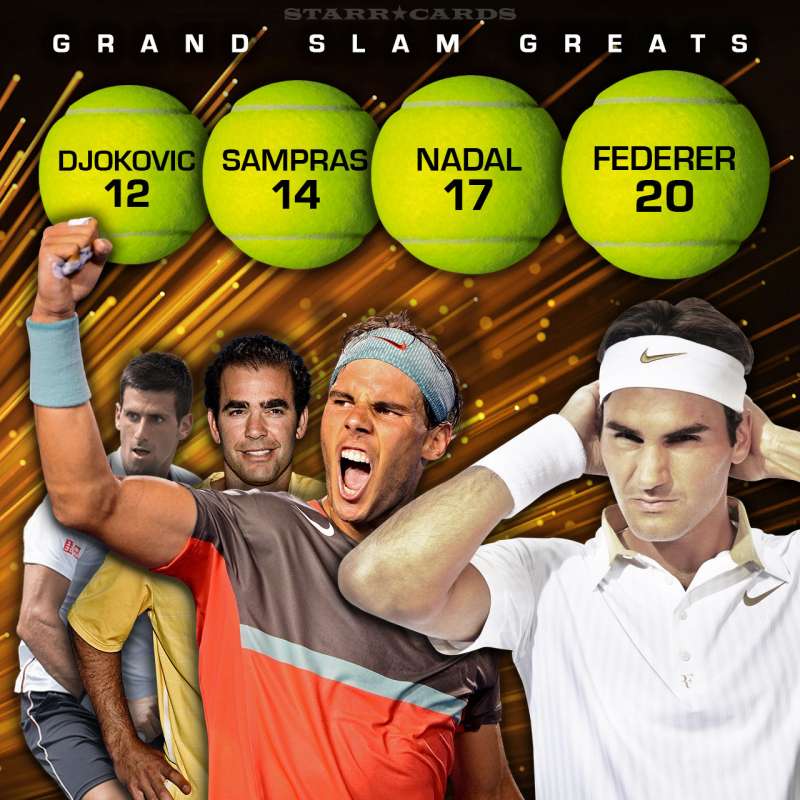 Below we present some of the numbers behind the Grand Slam title leaders. In head-to-head meetings between the three active leaders, Nadal leads Federer 23-15, while Djokovic leads Nadal 26-24, and Federer 23-22. In 2001, Federer won his only meeting with Sampras in a five-set thriller at Wimbledon.

Federer has won 20 Grand Slam singles titles (six Australian Open, one French Open, eight Wimbledon, five US Open), the most in history for a male tennis player, and held the No. 1 spot in the ATP rankings for a record 237 consecutive weeks and a record total of 302 weeks.

In majors, Djokovic has won six Australian Open titles, three Wimbledon titles, two US Open titles and one French Open title. In 2016, he became the eighth player in history to achieve the Career Grand Slam when he defeated Andy Murray in the French Open final.

Fair, or not, one of the most frequent benchmarks used to gauge a player’s greatness is his Grand Slam title total. One can only speculate how many more Slams Borg would have won had he not retired at 26 years of age, or how many Laver would have accrued had he not been banned from playing Grand Slam tournaments for the five years prior to the Open Era.