Before the Segway PT (personal transporter) made its public debut in 2001, rumors were rampant about the nature of Dean Kamen’s mysterious invention — then known by its code name “Ginger” — and how it might transform society.

In the years since its introduction, the Segway has underwhelmed in terms of its societal impact (outside, perhaps, the domain of mall cops), but it has made for some interesting mashups with traditional sports. 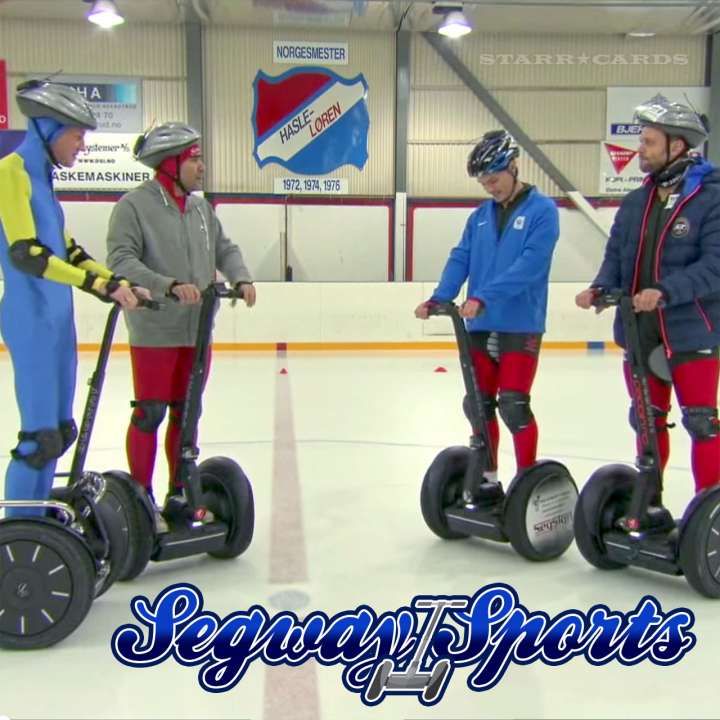 While still in the experimental stage, Segway sports have emerged in recent years at the intersection of tech and tradition. It will be especially interesting to see what kinds of new sports evolve when innovators no longer piggyback on existing games, but for now we present a handful of hybrids…

A few years back, the editors from the Polish men’s magazine CKM organized an iceless Segway hockey match with players from Legia Warsaw. The game was played with an exercise ball instead of a puck, and they swapped out the normally staid referee with a bikini-clad beauty on a three-wheeler.

The Segway’s impressive balancing ability was on full display during an impromptu football scrimmage in an Albuquerque parking lot. The participants managed to stay upright while throwing, catching and rushing (rolling?) the ball.

Golf may have made it’s Olympic debut last year, but it’s Segway-assisted variant was definitely not on the schedule.

Technically, the above video shot in Japan features Segway caddying, rather than Segway golf, nonetheless it’s on the green and it looks like fun. The appropriately named Asia Toride Country Club outside Tokyo offers a round with a buffet lunch for just under ¥10,000 (US $84).

Ah, there’s nothing like the purr of electric motors at the polo ground on a Sunday afternoon. You don’t need a pony for Segway polo — just a mallet, helmet, and white breeches.

A motocross bike is the ideal means for circumnavigating a supercross track, but a Segway with fat knobby tires will also do the trick. Two-time World Supercross Championship winner James Stewart, Jr. demonstrated how it’s done on his own backyard course.

If you have a surfeit of Segways and a biathlon course available, what else to do other than race?

Joe “the Cameraman” Previtera used a Segway to capture smooth motion shots of the cricketers prior to a match. Unfortunately, Joe didn’t heed the old “look where you’re going” adage, which applies whether you are walking or riding a self-balancing two wheeler.