Back when the WWE was still the WWF, one of the pro wrestling promotion’s greatest heels was Iranian-born Hossein Khosrow Ali Vaziri — better known as”The Iron Sheik.” More than thirty years after his brief reign as the WWE World Heavyweight Champion, a potential successor to his legacy has been blowing up on social media. 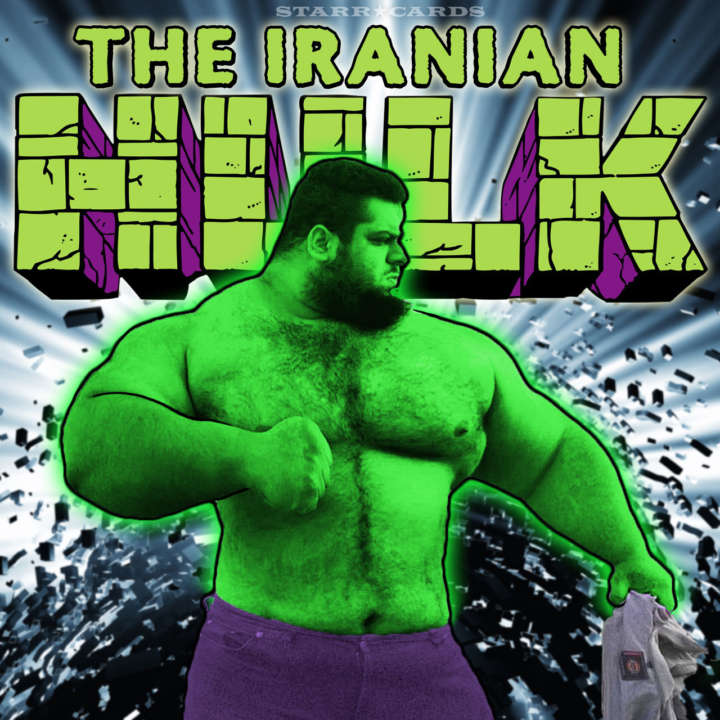 Going variously by the nicknames “The Iranian Hulk” and “Persian Hercules”, Iranian bodybuilder Sajad Gharibi has built a considerable Instagram following due to his comic-book physique.

Tipping the scales at a muscular 365 pounds, the 24-year-old Gharibi makes regular-sized adults look like children by comparison (still, check out the size of the fan’s hand).

With arms the size of legs, and legs the size of tree trunks, Gharibi sports super-heroic proportions that lend credence to his billing as a real-life Hulk.

Gharibi even has his posing down a la Lou Ferrigno from the 1978-82 Hulk television series, and his massive musculature has inspired Hulk-themed fan art.

While the Iron Sheik used to rile American wrestling fans into a xenophobic frenzy by waving an Iranian flag in the ring, Gharibi is just a garden-variety patriot that happens to have biceps that exceed 25-inches in circumference.

A couple of years ago, Gharibi stated his intention to join Iranian forces in the fight against ISIS in Syria…

… but a coveted WWE audition is never far from his mind.

While Gharibi’s favorite wrestler is Triple H, he would likely stand a better chance at landing a spot in WWE by studying Vaziri’s path to fame as the Iron Sheik.

Before he discovered professional wrestling, Vaziri was an accomplished amateur wrestler and served for a time as the bodyguard to the former Shah of Iran, Mohammad Reza Pahlavi.

In 1969, Vaziri emigrated to the United States. He helped coach two U.S. Olympic wrestling squads, while gradually getting his feet wet in the professional wrestling game. Riding a wave of anti-Iranian sentiment following the Iran hostage crisis, Vaziri built his Iron Sheik character into a reviled villain in the 1980s and the perfect foil for Sgt. Slaughter’s All-American persona.

While Vaziri lacked the massive physique that Gharibi possesses, he built his considerable strength and further embellished his foreignness by working out with Persian clubs — an exercise regimen which dates back to antiquity.