With their 136-111 victory over the Portland Trailblazers on Sunday night, the Warriors became the fastest team in NBA history to reach 69 wins (and only fourth team in history to reach that total). The night before, the Dubs’ record steak of 54 home wins in a row, was ended by a scrappy Boston Celtics squad.

Against the Blazers, Stephen Curry led the way for the Warriors with 39 points. Draymond Green held down the fort at center with his franchise-record 13th double-double of the season.

Curry broke the previous record of 286 3-pointers, which he set last year, with 24 games remaining. With nine more treys against the Blazers, Curry brought his season total to 378. With five games remaining, he will have to average just under five 3s per game to breach 400.

“That negative energy of overanalyzing situations or even mild panic is not necessary right now. We've got a pretty good focus as a unit of how we can bounce back from losses and just stay true to who we are.”

— Steph Curry, on bouncing back

Thompson has 262 3-pointers for the season, and still harbors hopes of surpassing Curry’s old record. Together, the Splash Brothers have dropped an NBA record 640 three-pointers on their opponents this season.

The Warriors will have to finish the season 5-2 or better in order to break Chicago’s 72 win total. The good news is three of the games are at Oracle Arena where the Dubs are 37-1 this year. The bad news is they still have two games left with the Spurs, including one in San Antonio. 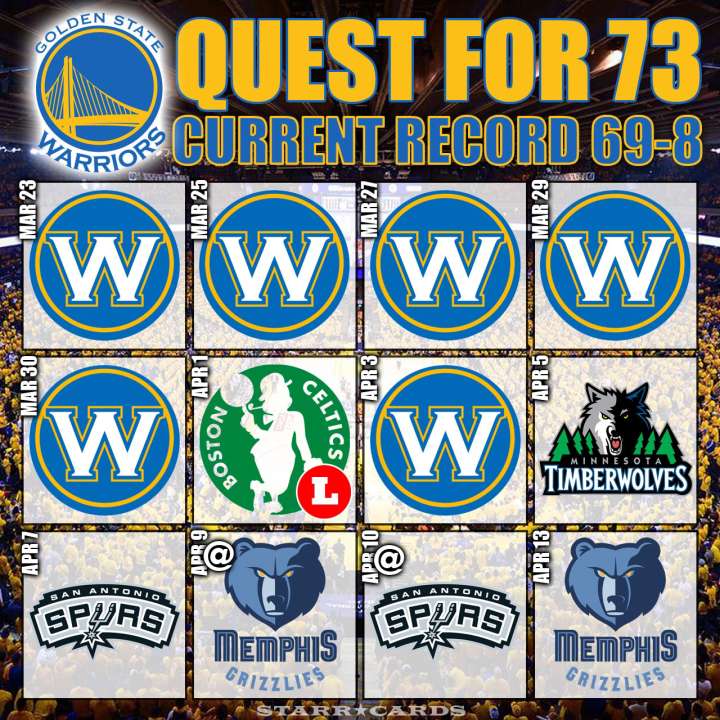 Further complicating the Warriors’ quest for 73 wins is Andre Iguodala’s recent ankle injury that is expected to keep him off the court for several more games.