LaVar Ball had a plan for his three sons long before they were even born. A firm believer in speaking his dreams into existence, he visualized his eldest, Lonzo, playing basketball for a single year for UCLA, before being selected by the Los Angeles Lakers in the NBA draft. The first half of that vision has already come to pass. The night of June 22 will reveal if the second half comes to fruition.

The two younger Balls, LiAngelo and LaMelo, appear to be on track to follow their brother’s path through UCLA to the NBA, further boosting the family-owned Big Baller Brand in coming years.

Since he first appeared on the national radar six months ago, Ball has been tirelessly promoting his sons, his brand, and his vision, which has produced a slew of quotable quotes. Here are ten of the many gems…

“Back in my heyday, I would kill Michael Jordan one-on-one.”

“He's going to be drafted by the Lakers. I already know this. I know this stuff before it even happen, you guys are still shocked. I'm like a psychic. Not a side kick, but a psychic.”

– LaVar Ball, on caring for his wife

“I'll tell you right now, he's better than Steph Curry to me.”

“Negativity sells, so everybody want to jump on me, but that's fine. While they're jumping on me, have fun, because my son is whooping your ass on that court.”

“These boys were born to go pro. Your mom's a P.E. teacher, I'm a personal trainer, your last name is Ball. How much more lined up can you be?”

– LaVar Ball, on his boys

“Everybody talking about, 'Oh, he's going to have an X on his back and they're going to come harder.' How do you think he going to get better if they don't come harder? I want you mad as hell at my son.”

“I had a little plastic hoop to teach Lonzo how to shoot on top of his head. He's my first son, so I spent a lot of time with him. And once you make the first one good, the other ones just follow.”

“All my boys going to be one and done, yes. We want to get to the NBA as quick as possible. They want that challenge.” 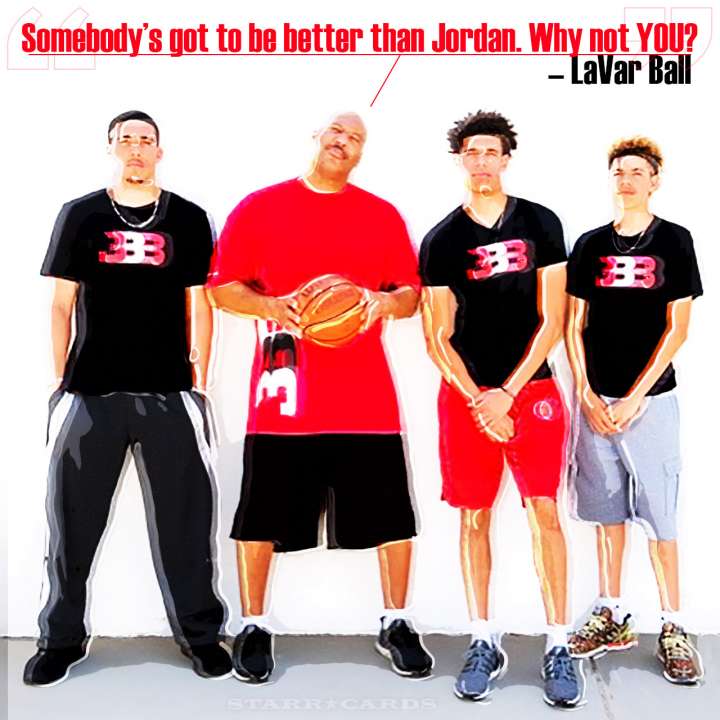 “Somebody's got to be better than Michael Jordan, why not you?'”