Ninja warriors, both those of medieval Japan and the more recent obstacle-racing variety, are accustomed to plying their trade at night, but when duty calls they can be tempted to show off their skills in broad daylight. And so it was that Lucas Gomes of American Ninja Warrior fame decided to try his hand(s) at the Hang Challenge…

Gomes, who along with his brother forms one half of ANW’s Brazi Bros, took a challenge in Pompano Beach, Florida to hang from a bar 100 seconds for 100 dollars. Participants could chose underhand or overhand grip, but were not allowed to use a mixed grip on the rotating bar. 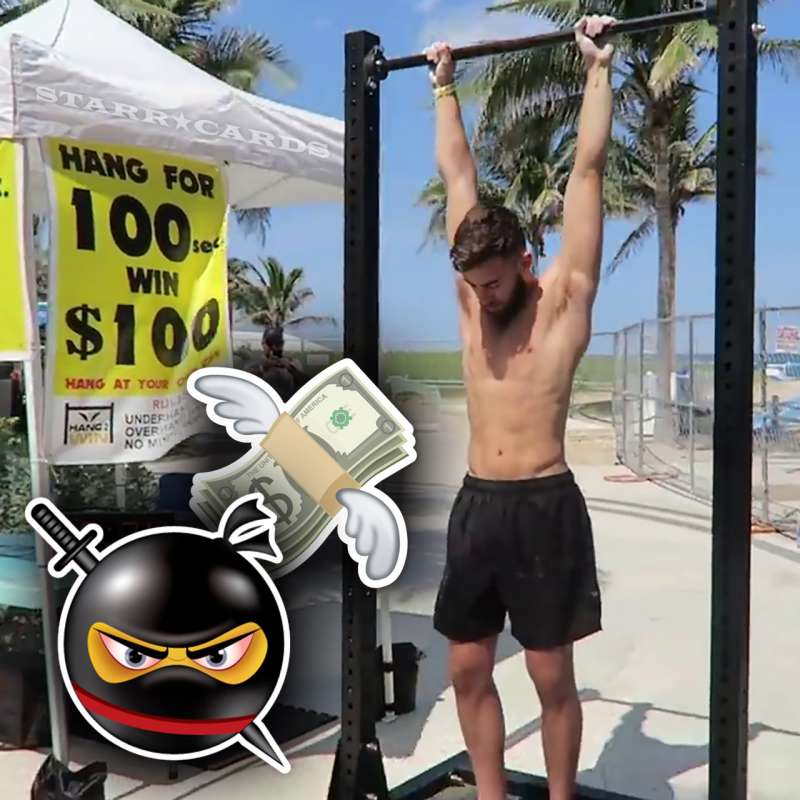 Gomes elected to employ an overhand grip and managed to hang 96 seconds before his fingers gave way, eliciting a scream of desperation from one of his onlookers.

In a subsequent video, Gomes replicates the spinning-bar setup at home and videos two more attempts, but fails again to reach the 100-second threshold. He leaves viewers with a vow to continue working at the challenge until he succeeds. Stay tuned…

Fitness motivator Corey Hall was enticed by the same Hang Challenge and imagined it would be the easiest 100 bucks he ever pocketed, but like Gomes he came up short as his grip failed with 25 seconds to go.

In his followup video, Hall makes it clear that the difficulty of the challenge is primarily due to the spinning bar, and he demonstrates that on a stationary bar he is able to hang for more than 2 minutes with minimal fuss.