Whittaker and Romero first met back at UFC 213 where the former had his hand raised after a grueling five round war to become the first Australian to wear UFC gold. 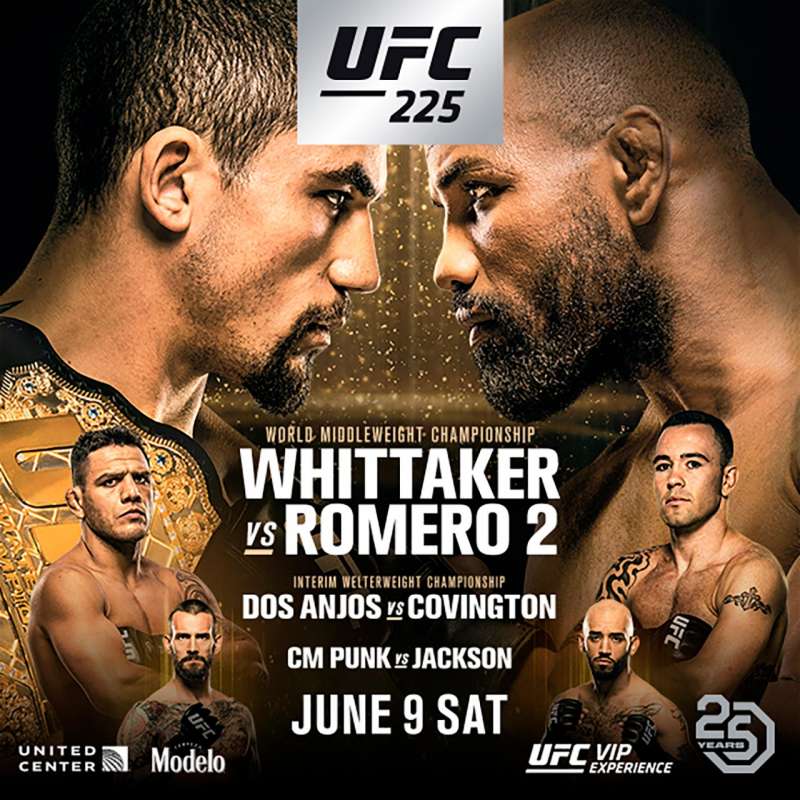 Romero confirmed his status as the number one contender by knocking out former champion Luke Rockhold, and now the Cuban gets a chance at redemption against the newly crowned champion.

Kicking off the pay-per-view portion of the UFC 225 card, former WWE superstar CM Punk will make his second appearance in the octagon where he will face Mike Jackson.

After losing his MMA debut at UFC 203, Punk gave an inspirational speech for the ages. His monologue from the octagon was so polished, it seemed almost as if it was lifted from a movie script. If an MMA-flavored remake of Al Pacino’s Any Given Sunday is ever made, the producers know who to get to play the lead.

On Episode 1 of UFC 225 Embedded, former lightweight champion Rafael Dos Anjos does media leading up to his interim title shot in a second weight class. Welterweight opponent Colby Covington continues his training at American Top Team, where he declares himself “King of Brazil”, then packs for his trip.

Already in Chicago, Whittaker gets his bearings with secret ancient-Chinese underwater stretches in the event’s host city of Chicago.

On Episode 3, Covington talks about the downside of his bad-guy persona, and middleweight champion Robert Whittaker de-stresses with his favorite pastime — video games.

Tuivasa continues his Chicago takeover to the point that he steps in as tour guide. Fighters check in, including featherweight Megan Anderson, while the Australians on the card brave a cold-weather photo shoot. Chicago’s hometown UFC 225 stars CM Punk and Clay Guida provide musical entertainment at a Cubs game.

On Episode 4, Covington continues his fight week family vacation, while Anderson and RDA continue to work their heavy hands in the training areas. Hotel ballrooms host a who’s-who of UFC 225, including Whittaker, Punk, Ricardo Lamas, Arlovski and Holly Holm.

Romero joins the stars of the card for the official open workouts, where the Chicago fans make their favorites clear.

On Episode 5, UFC 225’s athletes — including Punk, Tuivasa, Anderson, Sergio Pettis, Charles Oliveira, Covington and Jackson — talk to media and stare down their opponents. Afterward, Punk offers a backstage peek at the United Center, and Anderson begins her weight cut.

On Friday morning, all fighters make weight except for one, leaving the event’s headliner in jeopardy. But all parties make it to the ceremonial weigh-in, where UFC President Dana White confirms that Whittaker and Romero will indeed rematch.