The 2015-16 Golden State Warriors racked up a slew of NBA records in their pursuit of the 1995-96 Chicago Bulls record of 72 wins. They started the season by winning their first 24 games, which set a new standard of excellence among major professional sports in America. The Warriors home winning streak didn’t end until April Fool’s Day, after they had reeled off 54 in a row.

With their 125-104 victory over the Memphis Grizzlies on Wednesday night, the Warriors set the all-time record for wins with their 73rd victory. A game earlier they set the record for road wins with 34 in a season, and became the first team in NBA history not to lose back-to-back games during the regular season.

Against the Grizzlies, Stephen Curry was his usual MVP-self and led the Warriors with 46 points, 6 assists and 4 rebounds.

Curry broke the previous record of 286 3-pointers, which he set last year, with 24 games remaining. With ten more treys against the Grizzlies, Curry finished the season with the once unthinkable total of 402. Curry also extended his record streak of regular-season games with a made 3 to 152, with still no end in sight.

“At a certain point, about eight minutes in the first quarter, I was able to toe the line a couple times, knock it down and things started to flow.”

Thompson finished with 276 3-pointers for the season; together the Splash Brothers dropped an NBA-record 678 3-pointers on their opponents.

Five games ago, playing at home against the Portland Trailblazers, the Warriors became the first team to exceed 1,000 3-pointers in a season and finished with 1,077 for the year (the 2014-15 Houston Rockets owned the previous record with 933).

RUNNING PAST THE BULLS

The Warriors completed the season with four straight wins, including two on the road, to reach 73. Impressively, win number 72 came against the Spurs in San Antonio, where the Dubs hadn’t won in years. Their record at Oracle Arena for the season was 39-2, with both losses coming in April. 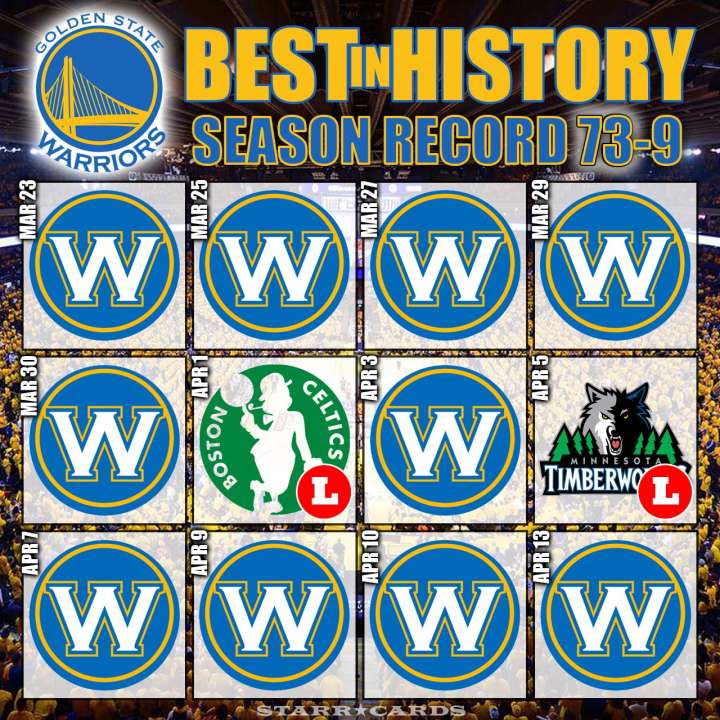