Aladdin had a number of items on his to-do list (e.g. detailing his magic carpet, giving Abu a bath, pawning off the genie’s old lamp) when Jasmine texted him that she was home alone. Naturally, this was all the motivation the purple-vested urchin needed to drop everything and fly on over to his girlfriend’s pad. 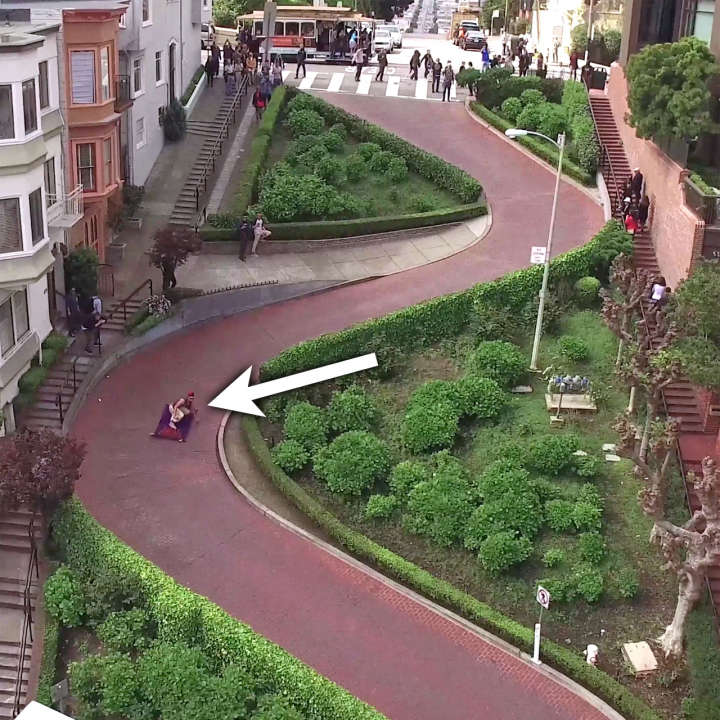 Aladdin’s magic carpet ride through the streets of San Francisco, including a serpentine run down Lombard Street, elicited more than a few delighted stares from tourists and locals alike.

After a spell, Aladdin made it safely to Jasmine’s place (aka the Palace of Fine Arts Theatre) and she hopped on his back for a ride. The pair floated past the Painted Ladies on Fulton Street before navigating down to the Bay at Crissy Field.

Leaving Aladdin's carpet in SF. Who wants it? It will be on the corner of 16th and Anza. pic.twitter.com/UwIhTN68xR

At the conclusion of Aladdin and Jasmine’s outing, the carpet was unceremoniously left at the corner of 16th and Anza. So if you spot any joyriders in the skies over San Francisco, you know what’s up.

ALLADIN IN THE BIG APPLE

Before Frisco, Aladdin was spotted last Halloween levitating over the streets of New York City. Note at that time the carpet lacked the flame detailing of version 2.0.

THE MAGIC BEHIND THE CARPET

Turns out that Aladdin’s magic carpet is really just a tricked out motorized skateboard — the brainchild of vlogger Casey Neistat and Jesse Wellens of the PrankvsPrank channel on YouTube.

For real flying on a skateboard, check out Aaron “Jaws” Homoki…