With their 114-98 victory over the Los Angeles Clippers on Wednesday night, the Warriors became the fastest team in NBA history to reach 64 wins. They also became the first franchise to record 51 home wins in a row, besting the ’96 Bulls by seven games.

As impressive as the Warriors win total is, Curry’s offensive contribution to the team — particularly in the realm of three pointers — is even more unprecedented.

Curry broke the previous record of 286 3-pointers, which he set last year, with 24 games remaining. Now with 11 games remaining, Curry has a total of 343 treys and an outside chance at breaching 400 for the season.

“Could a couple of our guys use a little mental rest and take a night off? Probably, but I wouldn't do that at the expense of losing games and possibly losing the 1 seed.”

Against the Clippers, Curry and Klay Thompson (aka The Splash Brothers) continued to improve their NBA record for most 3-pointers by teammates during a season and now have 580 — fifty-five more than last season’s record haul. For the game, the dynamic duo combined to go 11-20 from beyond the arc.

The Warriors will have to finish the season 9-2 or better in order to break Chicago’s 72 win total. The good news is 8 of the games are at Oracle Arena where the Dubs are undefeated thus far. The bad news is they still have two games left with the Spurs, including one in San Antonio. 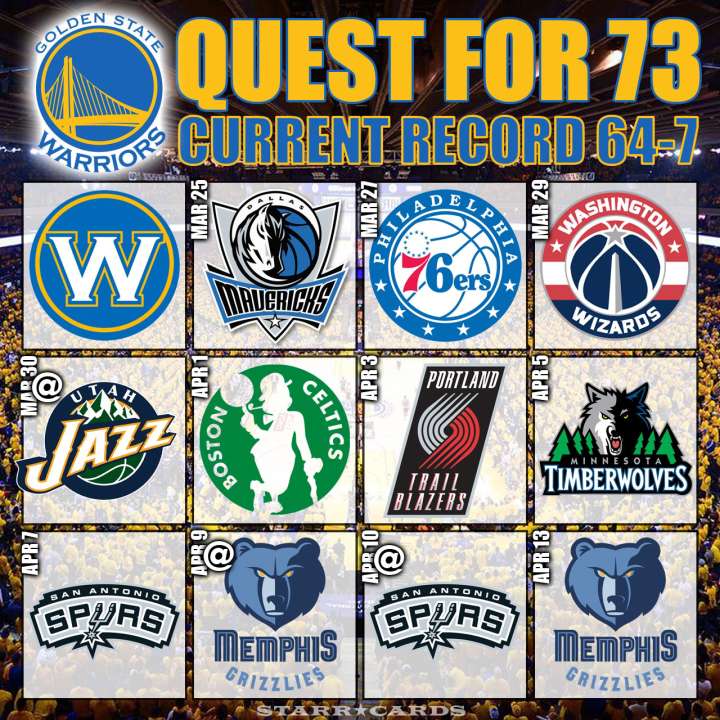 Further complicating the Warriors’ quest for 73 wins is Andre Iguodala’s recent ankle injury that is expected to keep him off the court for at least another week. Can Brandon Rush step up his game?