Last year with the San Francisco 49ers, Jim Harbaugh did a pretty good job flying under the radar despite an internal plot to have him replaced as coach. Now serving as the Michigan Wolverines head honcho, he’s been making national news away from the gridiron.

Earlier in the week, Harbaugh was driving with an athletic department staff member in Ann Arbor when they came across an overturned SUV on I-94. The pair of samaritans gave their coats to keep one of the victims warm while they waited for an ambulance to arrive.

FIRST BASE COACH FOR A DAY

On Saturday, in slightly less dramatic news, Harbaugh filled in as the first base coach for the Oakland Athletics at the invitation of manager, and life-long buddy, Bob Melvin.

All this happened in a week that started with Harbaugh tweeting congratulations to Judge Judy on her five-year contract extension.

Big Congrats to Judge Judy on signing her contract extension thru 2020 from a Devout Fan!

Harbaugh notably appeared as a smiling face in Judge Judy’s court gallery a couple of years ago.

Now, we’re waiting for Harbaugh to cap his media blitz off by naming Screech of Saved by the Bell fame as an honorary coach for the Wolverines spring football game. 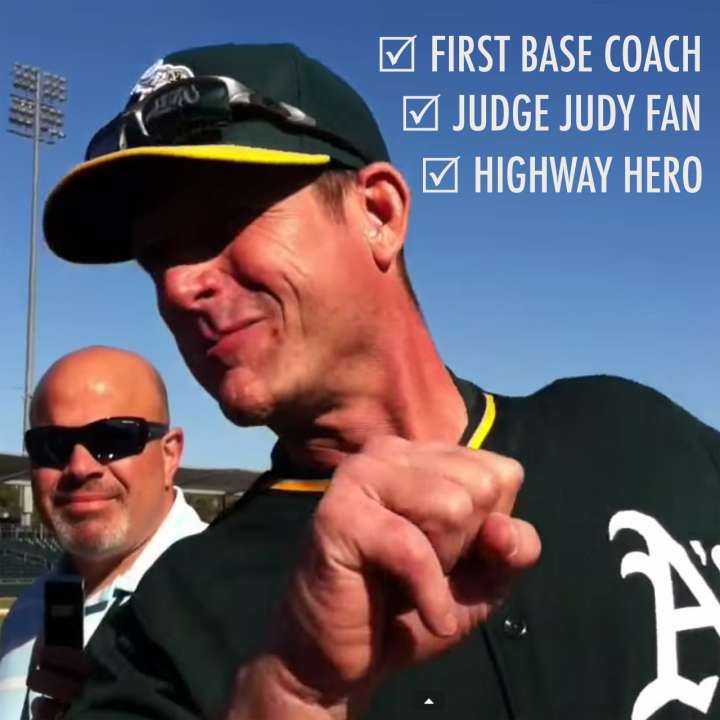