LeBron James took a break from sulking about the Cavaliers’ NBA Finals flameout, to come on the Tonight Show for a game of faceketball with Jimmy Fallon. Fallon, nursing a finger injury, managed to to hit the first hoop, before James answered. 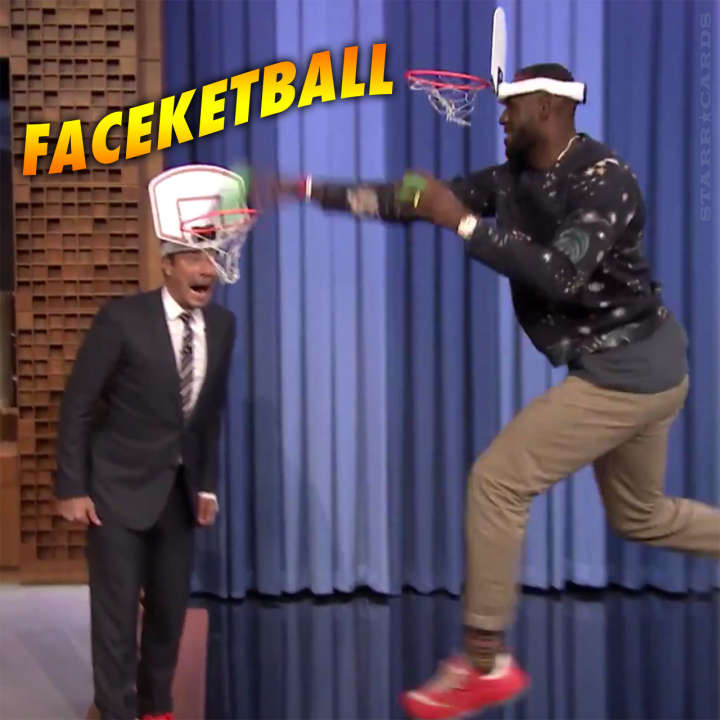 With the score knotted at 2-2, the host suddenly decided to switch to a dunk-off. Fallon put one down on the 6’8″ four-time MVP, before James responded with a rim-wreaking double jam for the 4-3 win.

James real motive for stopping by 30 Rockefeller Plaza was to promote his bit part in the upcoming Judd Apatow-directed flick Trainwreck. James made the most of the branding opportunity by presenting Fallon with a gift of size twelve Nike LeBron XII Trainwrecks.

In the movie clip featured on the Tonight Show, James relentlessly promotes Cleveland. In another clip from the movie, he coaches his sports doctor, played by Bill Hader, to ask out Amy Schumer.

On the way to the Trainwreck movie premiere in Cleveland, James pitched a very LeBron-centric concept for a sequel to Schumer, Apatow, and Hader. In the Funny Or Die sketch, the foursome stop for burgers at Swensons — Akron, Ohio’s iconic restaurant.