The most anticipated heavyweight MMA title bout in years features two knockout artists in Stipe Miocic and Francis Ngannou. On Saturday night, the heavy hitters will duke it out at TD Arena in Boston as UFC 220’s main event, preceded by another title fight in the meeting between light heavyweight champion Daniel Cormier and his challenger, Volkan Oezdemir…

Cormier is returning to the octagon for the first time since being knocked out in his rematch with Jon Jones last summer. The former Olympic wrestler regained the belt after Jones tested positive for a performance enhancing drug, and now he’s eager for another crack at win number twenty after having compiled a 19-1 record.

Oezdemir, who has a two-and-one-half inch reach advantage over Cormier, is coming off first round wins by knockout in his last two fights. 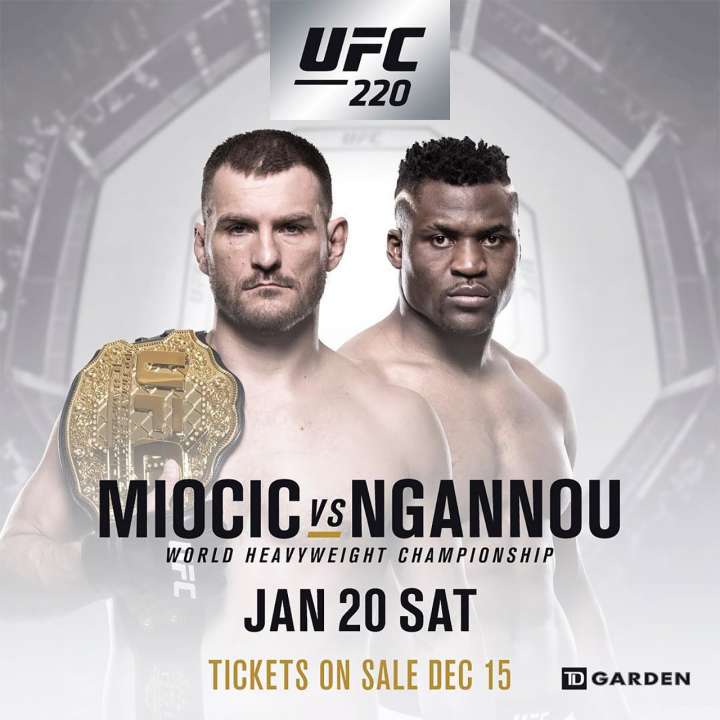 Miocic enters Saturday’s fight having defended his belt twice since first claiming it with a 2016 win over Fabricio Werdum in Brazil. His last four fights have all been won in the first round by either KO or TKO.

Ngannou, a Cameroonian, was living on the streets in Paris for a time before beginning MMA training at the age of 27. Now fighting out of Las Vegas, The Predator has been on a tear having won his first six UFC fights with relative ease.

On Episode 1 of UFC 220 Embedded, Miocic wraps up his Ohio camp and tends to snowblowing duties at home. In sunny Florida, Oezdemir hits the gym with high-caliber training partners including former champion Rashad Evans.

Cormier describes the mental game that drove his return to the Octagon and the love for his family that keeps him focused. Ngannou arrives in the Big Apple and kicks off fight week with an African meal.

On Episode 2 of UFC 220 Embedded, Cormier travels cross-country with his family and camp, while Miocic shops for coat hooks alongside friends who help with his home improvement.

In St. Louis, Oezdemir watches teammates compete at Fight Night, then back in the gym, he trains with his opponent’s former teammate and close friend Luke Rockhold. Still in New York City, Ngannou embarks on a day of media and shares a laugh with Cormier.

On Episode 2, Cormier keeps the mood light in the hotel gym, while opponent Oezdemir finishes his training camp in Florida and packs a Swiss flag for the trip.

Miocic makes his way to Bristol, Connecticut, where he and challenger Ngannou do a day of media appearances on ESPN.

On Episode 4, Cormier shows off his makeshift in-room kitchen, as Oezdemir takes in a Celtics game from the front row.

Meanwhile, Miocic gets in a boxing workout at a Peter Welch’s Gym in Boston, and Ngannou follows up a training session with physical therapy.

On Episode 5, Miocic endures his teammates’ teasing through another boxing gym workout. Oezdemir sticks to his training routine, while champion Cormier dives into his weight cut.

Ngannou meets a fellow imposing Cameroonian, Philadelphia 76er Joel Embiid, who predicts a second round victory by KO. Later, tensions rise when the fighters attend UFC 220 media day at Fenway Park, with Cormier and Oezdemir continuing their standoff later at the hotel.

On Episode 6, Cormier has his kids play as his character in the new EA UFC 3 game, then cuts weight in the sauna alongside teammates including Cain Velasquez. Oezdemir and Ngannou sweat it out in the workout rooms.

Miocic spends his Thursday evening in an ice bath, and all of the fighters make weight on Friday morning. Ngannou gets his ‘do touched up, and then the fighters square off against their opponents at the ceremonial weigh-in at TD Garden.