Gordie Howe passed away at the age of 88 on Friday. Incredibly, and uniquely, Howe played professional hockey in six of the ten decades in which he lived. At 18 years of age, Howe scored the first of his many goals in his NHL debut with the Detroit Red Wings on October 16, 1946. 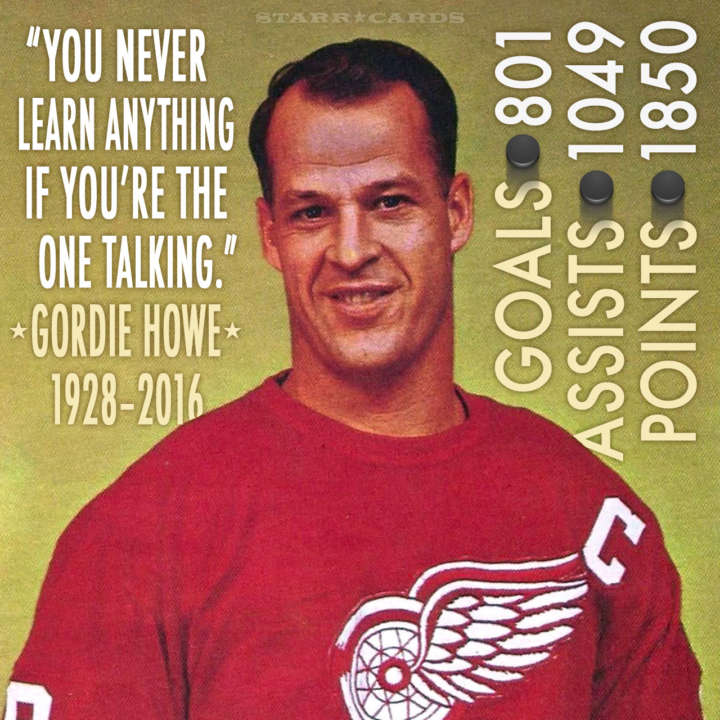 At the time of his retirement, Howe’s NHL totals of 801 goals, 1,049 assists and 1,850 points all ranked first in the record books. Wayne Gretzky, who idolized “Mr. Hockey”, and would later surpass his records (with the exception of games played and games played with one team), was one of the first to pay tribute to the legendary No. 9.

Unfortunately we lost the greatest hockey player ever today, but more importantly the nicest man I have ever met. (1/2)

Sending our thoughts and prayers to the Howe family and to the millions of hockey fans who like me loved Gordie Howe. RIP Mr. Hockey. (2/2)

Gordie Howe was an inspiration to me, both on & off the ice. Thank you, Gordie, for setting the benchmark. #MrHockey pic.twitter.com/h04HgUNvFg

And you're the reason I wore #9. Gordie Howe will be remembered generation to generation #GordieHoweHatTrick #9RIP https://t.co/xfiZIQPaQR

Very sad waking up to the news of Gordon Howe passing away. One of the greatest to ever play our game, but more importantly one of the best

Words are not possible to say how much impact Gordie Howe made on Hockey. My Condolences to the Howe Family on his passing today. RIP GORDIE

Statement from the Howe family… Hockey Legend Gordie Howe, age 88, passed away peacefully this morning with his family by his side. The Howe family would like to thank friends and fans for their love and support. Gordie had a special connection with Red Wings fans and was always touched by their commitment. We are celebrating the life of a devoted husband, father, grandfather, great-grandfather and a friend to all. Arrangements will be announced once they are finalized. | #9RIP

Today the hockey world lost a role model and legend. Thank you for your contribution to the game, Mr. Hockey.

Our sincere condolences go out to the Howe family, the @detroitredwings and all those who knew the great Gordie Howe.

The #CBJ join the rest of the hockey community in mourning the passing of the great Gordie Howe.  He was a legend in our sport and a gentleman of the highest order. He once said, “You find that you have peace of mind and can enjoy yourself, get more sleep, and rest when you know that it was a 100 percent effort that you gave – win or lose.” Gordie Howe always gave 100 percent on and off the ice and the impact he had on those who knew him well, met him briefly, saw him play or simply heard stories about him will never fade.  We offer our sincere condolences and prayers to his family, friends and fans.  Rest in peace Mr. Hockey.

Some of our favourite Gordie Howe photos. See the full gallery in our bio. #9RIP

Our thoughts and prayers are with the family & friends of Gordie Howe and the @detroitredwings. Rest in peace Mr. Hockey. #9RIP

Our thoughts and prayers are with the Howe family. We've lost a true legend of the game. ‪#‎MrHockey‬ ‪#‎9RIP‬

Gordie Howe was an incredible player and person. Our thoughts & prayers are with his family today. RIP Mr. Hockey. You will be missed. #9RIP

He will forever be remembered as one of the best of all time, a legend of the game. #9RIP #MrHockey

Our thoughts and prayers are with the Howe family after the passing of Mr. Hockey, Gordie Howe, today.

#Legend. Gordie Howe's impact on hockey is nothing short of legendary. Rest in peace #MrHockey.

The hockey world lost a legend. Condolences to the family, friends and @detroitredwings on the passing of Gordie Howe. #9RIP

Our thoughts are with Gordie Howe's family and @detroitredwings nation. Rest in peace, Mr. Hockey. #9RIP

Our thoughts are with Gordie Howie's family and friends. Rest in peace, Mr. Hockey. #9RIP