Last night, the second half of the field took on the Las Vegas National Finals obstacle course on American Ninja Warrior. When it was all said and done it proved to be the hardest Stage 1 in the show’s eight-year history.

Geoff Britten, who became the first ninja to successfully complete every ANW course last season, went out on the Snake Run, which replaced Piston Road as Stage 1’s first obstacle. Fellow racing legend Kacy Catanzaro went out on the second obstacle, the Propeller Spin, while Brent Steffensen and Meagan Martin succumbed to the Log Grip which followed.

One contestant hoping to break the string of early exits by big-name ninjas, was fun-loving Jake Murray. The Denver-based wedding photographer enjoys a familial advantage over his competitors, in that he gets his body tweaked and aligned by a chiropractor father.

Dodgeball skills notwithstanding, Murray is a gifted athlete stays who likes to stay loose in the minutes before competition by listening to tunes on his iPod.

Murray stepped up for his run wearing a front-facing fanny pack, which piqued the curiosity of commentators Matt Iseman and Akbar Gbajabiamila. Just before embarking on the course, Murray twisted the pack to his backside, then sprinted across the Snake Run into the Las Vegas night… 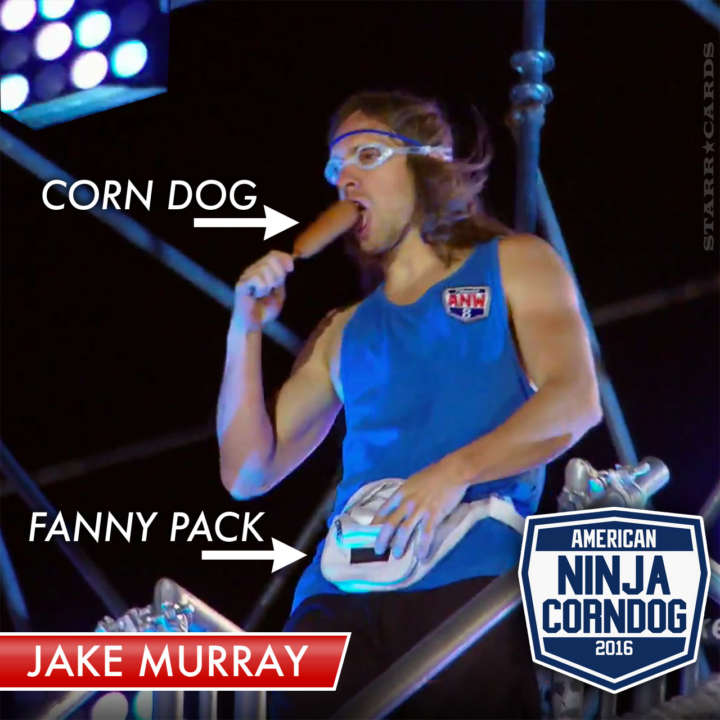 Immediately after posting the fastest time on Stage 1, Murray fished around in his fanny pack before pulling out a pair of swim goggles. After donning the eyewear, he removed a corndog from his fanny pack, took a bite, then stepped off the platform into the water 20 feet below.

Murray was one of only 17 ninjas to complete Stage 1 — the fewest of any season in the show’s history. With plenty of new obstacles looming in the next two stages before Mt. Midoriyama, it looks unlikely there anyone will claim the $1,000,000 prize this year.

Matt & Akbar better get their headbands ready cause @amurraycan is going to Stage 2! #AmericanNinjaWarrior pic.twitter.com/KcGVww7Xr7