In the span of half a baseball season, gap-toothed Yankees power-hitter Aaron Judge has gone from going unrecognized by fans in downtown New York City, to being the front runner for both the Rookie of the Year and American League MVP awards. Last night, the 6-foot-7 phenom punctuated his meteoric rise with a show for the ages in the 2017 T-Mobile Home Run Derby at Marlins Park. 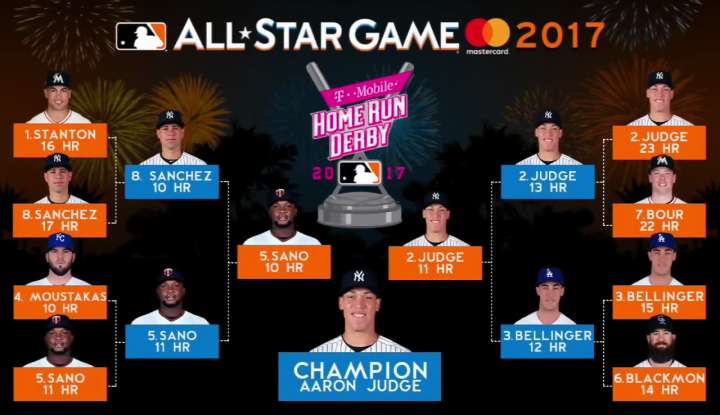 Judge entered the HR Derby as the No. 2 seed behind slugging-legend and home crowd-favorite Giancarlo Stanton. After Stanton was eliminated in the first round by Judge’s teammate Gary Sanchez, Stanton’s teammate Justin Bour tallied 22 homers — the fourth most ever in a round — in his match up versus Judge.

Judge calmly responded with 23 first-round dingers to advance to the second round, where he dispatched with Los Angeles Dodgers rookie Cody Bellinger 13-12. In the finale, he prevailed over Minnesota Twins third baseman Miguel Sano 11-10 for a total of 47 home runs overall. 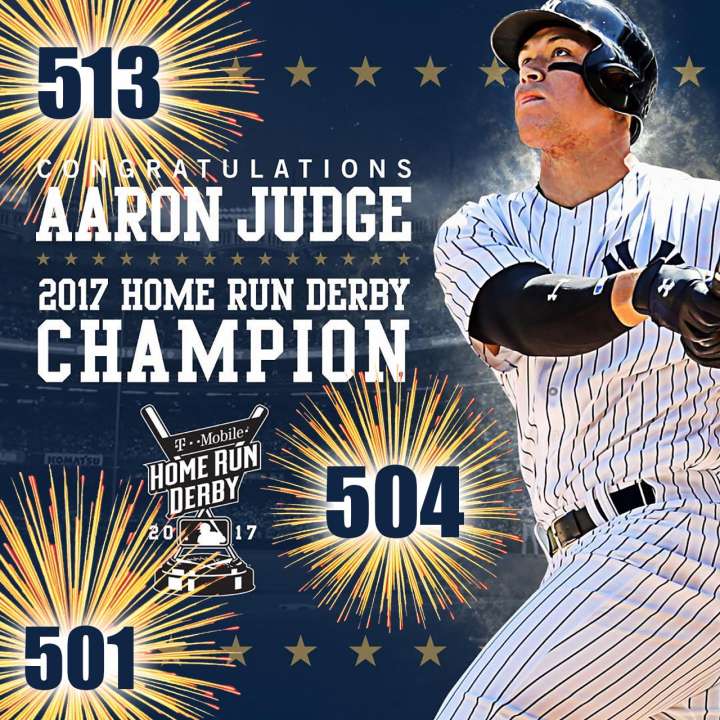 Judge became the third player — after Mark McGwire in 1992, and Ken Griffey Jr. in 1994 — to win the HR Derby after having at least a share of the MLB HR lead at the All-Star break. His 23 dingers in the first round are the fourth most in the history of the event.

Judge hit a wide array of bombs including the longest ball of the competition — a jaw-dropping 513-foot shot. The overall distance travelled by his home runs was measured at 3.9 miles by StatCast.

Aaron Judge's first round spray chart. Dude would mis-hit a ball and it would still go out. pic.twitter.com/dqlyYB12Qp

Judge’s spray chart from the first round alone gives the appearance of in-stadium fireworks going off a week late for the 4th of July.